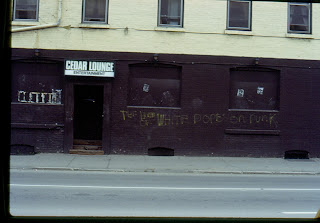 This is taken facing north, from the south side of King St. A little to the right is Talbot St. This was the door that you entered and paid your $2 cover. When you first walked in there was sort of an alcove that had vertical members (like 2 x 4's in an unfinished basement) that you could see all around the club and decide if you want to pay your cover or not. Many kids took one look and never came back again...their loss. This photo was taken on 8/15/80 the day after a Forgotten Rebels show and their was graffitti on several buildings downtown, obviously the punks did that!


1. The Spies...Underground...from their only 7" and they came from Windsor Ontario. Played the Cedar several times, renamed themselves The Nelsons and played a few times towards the end of The Cedar Lounge.

2. The Secrets...I'll Cry Tomorrow....Toronto based, and features 3 members of the original Viletones and a Diode. This and the next tune were taken from the OPM CD Teenage Rampage. These guys were a step out of time with the punk and new wave that was happening in the late 70's and preferred to play early 60's rock'n'roll, definitely garage like and they still sound REALLY good to these ears. 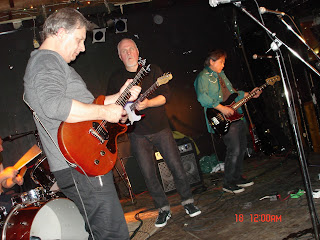 The Scenics playing live at Call The Office in London Ontario.

4. The Scenics...O Boy...from the Last Pogo CD, think it came free if you pre-ordered Treat Me Like Dirt book. Another band that was a step out of time, too arty for the punks, yet too punky for the artsies! Make sense? Not to me either, but these guys were one of the first Toronto bands to jump on the DIY bandwagon, recording themselves, playing out live and trying out new things. In their lifetime, they releaesed an LP, a 7" and appeared on The Last Pogo complilation LP.

5. The Scenics...Do The Wait...taken from the Sunshine World CD. There's that break near the end of the song, right after they sing 'Do The Wait' that is almost unnerving...done intentionally of course, these guys have tricks up their sleeves and you gotta listen close sometimes to pick them all out. If they only came from NYC or London.... 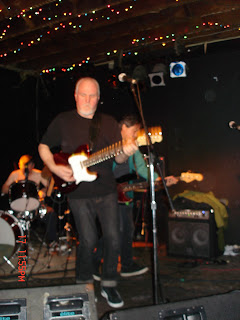 Another shot of The Scenics playing at Call The Office...that's Andy in the center.

6. The Scenics...Waiting For My Man...from the How Does It Feel To Be Loved CD. These guys are currently going through all of their old tapes and releasing them as downloads on their website. There's some gems there... As a piece of trivia, Andy, guitarist/vocalist owned a record store here in London back in the early to mid 80's. Located at the SE corner of Clarence and Queen the building is long gone. There's also an interview that we did with Andy that appeared in an early edition of Mongrel Zine.

7. Arson...Pretty Girls...this was unreleased at the time and appears on the compilation Smash The State Volume 1 put out by Frank Manley to accompany his book of the same title. Arson were from Toronto and released a 7" and appeared on at least one compilation during their time. They also appeared at least twice at the Cedar Lounge. 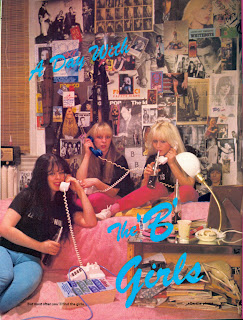 This photo is from the Oct/Nov 1978 issue of Bomp Fanzine...there's also a great article on the Toronto scene by Ralph Alfonso in that ish.

9. The B-Girsl...Who Says Girls Can't Rock...from the OPM CD of the same name. An all girl new wave/powerpop band that later featured Marcy Saddy from London on drums. Another one of those bands that coulda and shoulda gone far...opening for The Clash, hanging out in NYC and LA, pictured in the cool rock'n'roll mags of the time like Cream, Who Put The Bomp and Rock Scene. Bassist Cynthia was the girlfriend of Dead Boy Stiv Bators. 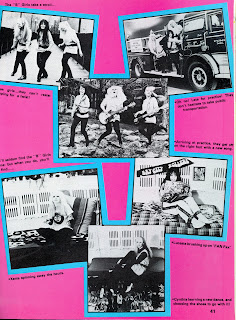 Another page from the same ish of Bomp Fanzine.

10. The B-Girsl..B-Side...from their only output of the time, a 7" on Bomp Records. An LP was rumoured to be coming out on Bomp but never materialized...in the meantime The Go-Go's got their LP out and had major mainstream success.

11. The B-Girls...Jealousy...also from the above CD. One time the B-Girls were advertised as appearing at The Cedar, but they couldn't make it, or were late or something. Opening up was NFG, who dressed up entirely in drag and claimed they were the B-Girls...so maybe The B-Girls are responsible for the way those guys dressed after that show!

13. The Mods...Step Out Tonight...from their 7", this is the song that shoulda broke these guys out! 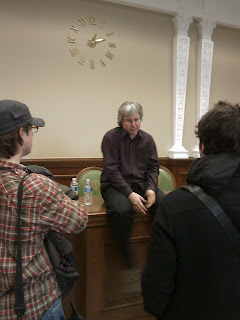 David Quinton talking to some future lawyers at a talk at the University of Western Ontario Law School early 2010.


14. David Quinton...Make Up Your Mind...from the CD Bombs and Lullabies. David was the drummer of The Mods and was handpicked by Dead Boy Stiv Bators to be his drummer when Stiv cut his solo powerpop record on Bomp Records. David also played in a late version of The Dead Boys, helping out Stiv. He's presently a big wig lawyer in Toronto, dealing with huge entertainment people but still LOVES to talk about his days playing in bands. He did a talk at the Law School here at the University recently and mentioned playing at The Cedar, playing with Stiv Bators, meeting Greg Shaw and all of the other influential people of the time period. He has some great stories, so if you ever get a chance to hear David talk, don't miss it!

15. The Forgotten Rebels...I Think Of Her...recorded live at The Cedar Lounge and is from the CD Forgotten Rebels on OPM Records. The Rebels played The Cedar many many times and always put on an entertaining show! 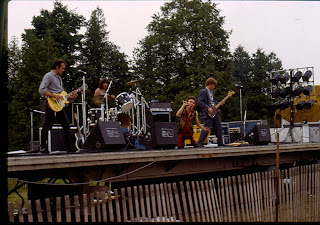 The Forgotten Rebels playing in a farmer's field somewhere outside of Goderich Ontario...7/4/81. It rained that day which put a stop to the show for awhile. Also on the bill were The Demics, Zellots and Fictions.

16. The Forgotten Rebels...Surfin' On Heroin...from their This Ain't Hollywood LP on Star Records. One of those songs that The Rebels and bassist Chris Houston will always be remembered for. 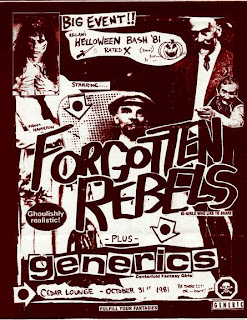 17. The Forgotten Rebels...Elvis Is Dead...from the above CD, and again live at The Cedar. Probably recorded in Aug 1980.

18. The Forgotten Rebels...You're A Rebel Too...from the In Love With The System LP on Star Records. Bought this right after seeing the Rebels in Aug 1980 and played the shit out of this one. Lead singer Mike still gets a band together every once in awhile and plays out as The Forgotten Rebels and the kids still dig it!

19. The Fast...Wet'n'Wild..from the Fast For Sale LP...3 NYC brothers form a band in the very early 70's, pre-dating the NYDolls even. They play their own crazy version of bubblegum meets glam meets theatre...way ahead of the curve, these guys didn't fit in with any scene. As far as i can figure, they only played one night at the Cedar Lounge, 11/4/78.

21. Joe King Carrasco and The Crowns...Houston El Mover...from his Island LP. Joe released lots of records back in the day, toured constantly, appeared on American Bandstand and put on amazing shows and obviously was based in Texas. He only played one night at The Cedar, 7/24/79 with The Zellots. I was a schmuck and didn't go in cause the cover was an astromical $5 (in those days, cover was usually $1 or $2) and had no idea who Joe Carrasco was. Joe later came back to Fryfogles (club on Dundas St where the Library presently is) and it was supposedly a really wild show according to legend. Fryfogles was another influential club and we'll do a Radio WW special on it in the near future!

22. The Standing Waves...Integrating Circuits...from a 7" they released, again based in Texas and this combo had a bit of that Sir Douglas meets new wave sound. The beauty of The Cedar Lounge, is you could almost always be guaranteed to see/hear a cool band and there were lots of surprises like The Standing Waves.

23. Psychedelic Furs....Pulse...from their first LP and they made one appearance at The Cedar, 10/6/80. Another show i'm still kicking myself for missing, but think i had an exam or something the next day...The Zellots covered this song in their live show.

24. Fingerprintz...Close Circuit Connection...from their self titled LP, some of these guys went on to form the commercially successful The Silencers. 10/16/80 to 10/18/80 at The Cedar.

25. Chris Spedding...Hurt By Love...from the Hurt LP, Chris made several stops in London over the years, and 1/2/81 at The Cedar Lounge. 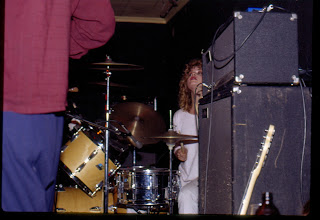 Certain General playing at The Embassy Hotel 1/1/83...that's mMarcy Saddy on the drums and is also the only picture I have of her in the band. There's more pics from this show on the Radio WW page on facebook.

26. Certain General...B2C2...from their Holiday Of Love EP from 1982. It was the summer of 1981 and drummer Marcy Saddy brought her latest band, NYC based Certain General to play Rose and Doug's wedding at The Cedar Lounge. The band decided to stay here for awhile playing club shows at The Cedar and Fryfogles and supposedly rehearsing. They put on some amazing shows, one of the first bands of that era that i saw that started to touch on psychedlia and surf sounds and if i remember correctly, would bring lit candles to the stage to enhance the vibes of their show. They came back a year or 2 later and played at The Embassy Hotel, i'll try and dig out my pics from that show.

Thanx for all the call-ins, emails, kudos etc etc....on next week's show, we'll continue this special and probably start the show with some more Certain General. 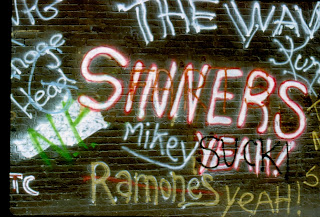 The west wall of The Cedar Lounge, picture taken sometime in the summer of 1980.

The show is archived at:

Happy New Year!
Posted by whatwave dave at 11:45 AM