But we had a good number of solid local combos, some of whom would go on to release their own records, many highly collectible today. Bands like The Hippies, Generics, Terminals, Motives, Second Thoughts, Spiral Scratch, Radio 4, Crash 80’s, Conning Tower, Idiot Savant, Mettle, Dead Rabbits, UIC, Enemas, Napalm Babys and so many more were making noise and drawing people out to see them!

In the summer of 1981 we had an event that helped the local bands go up a step musically. Sinners drummer Doug, and Rose, who was a sometime waitress at the Cedar (if memory serves correct) were getting married and the bash was at the Cedar Lounge. Coming directly from NYC was a band called Certain General, which just happened to have local tub thumper Marcy Saddy in the band, fresh from her stint in Toronto’s finest all girl combo, The B Girls. In the B Girls, Marcy had opened for such notables as The Clash, appeared on a BOMP single and had a picture spread in Bomp Magazine amongst other things! Certain General hit the stage of The Cedar Lounge that night, and played a set of surf meets psychedelic meets post punk that opened the ears and brains of everyone there! They stuck around London for a few weeks, rehearsing, playing local and out of town gigs, and getting ready to release their first record, which brought them a fair bit of acclaim in the press! Just check Certain General’s wiki page for an idea of what they accomplished!

Early 1982 and there was a bash to tear down the wall at the Embassy Hotel. There was a large dividing wall in what was called The Sunnyside Room, the big room where the bands played. This wall prevented line of sight from more than half the room to the stage. Owner Helen Haller didn’t want the expense of tearing down the wall, so a bunch of local bands organized a one day bash to help pay for the renovations. With loads of co-operation, the bash was a success, money raised and the wall came down. Unfortunately instead of having the punk/new wave bands play there, the bar reverted back to country as the old time drinkers did less damage (one front window was damaged almost weekly when there was a punk event happening there…finally the Embassy boarded over the window for good) and drank way more beer than the kids. Things reverted back to the kids after a short time and they got their music which lasted until the demise of The Embassy many years later.

And on May 1st 1982 The Cedar closed its doors to bands with a huge blowout bash that resulted in furniture being tossed from second floor windows onto the street below. The end of an era here in London as times changed. The entire block the Cedar was located on is now the Budweiser Gardens, which ironically hosts the kind of music The Cedar Lounge was an escape from. 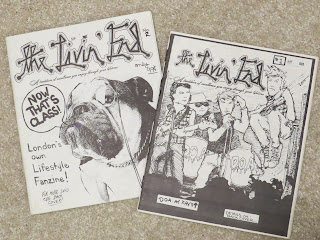 Later developments….more zines with a bit of help from Mike Niederman….Livin’ End published by Jan Maxwell and lasted 2 or 3 issues. Zines really contribute greatly to the scene and get the word out to the underagers and people all over the world. Livin’ End, What’s The Poop and coverage in places like Maximum Rock’n’Roll really validated our scene. 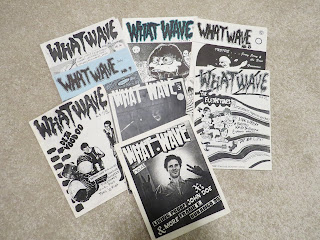 What Wave zine….started around 1980 (by poster artist Al Cole) and lasted until 1994….known around the world as The Canadian Garage Music zine. Also a record label and released over a dozen compilation cassettes of bands. Lots and lots of local stuff released on the compilations. 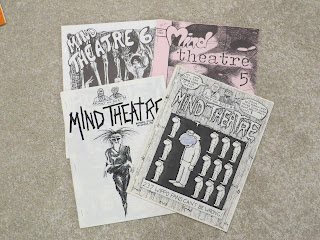 Then what goes around, comes around.  The Nihilist Spasm Band and their artist pals now had offspring old enough to start playing music and they did!! There was a whole scene that started to happen around this bunch. Usually playing art galleries, but also ventured into places like The Victoria, all ages shows and even the Embassy Hotel’s smaller room as a whole new scene of kids erupted. With band names like Anthrophomophics, Stupid Head, Bits Of Food, Lubatunes, Brain Show, and many others, you could guess the music wasn’t quite like anything else happening around here! This was definitely art rock with some of it very electronic, some keyboard oriented but definitely unlike anything from the class of 77 guitar punk! And they had their own comic/zine called Mind Theatre which covered a bit of the scene, but was definitely more comic/art oriented and really showed that some of these kids were major art talents. And to bring it even more full circle, Mike Niederman helped some of these bands release cassettes of which there were dozens, and I’m sure he helped them get started with their Mind Theatre publication.

Thanx for putting up with me and my yammering about a long gone scene. And here’s a couple of books from which you can get even more info about the scene and the times….What Wave #24, Graphic Underground: London 1977-1990 and Treat Me Like Dirt (published by Ralph Alfonso, who is the manager of The Diodes and brought them here to London for the first punk show in London). There was also a documentary made about this time period, called Stinkin’ Out The Joint (named after a 63 Monroe LP) and was done by former CHRW Manager Mario Circelli…this came out around 2003 and you can find it on youtube.  There is also a documentary on the Toronto and area punk scene called the Last Pogo Jumps Again by Colin Brunton which talks a bit about the London punk scene. This is a really good doc and goes into the Toronto scene in great depth.